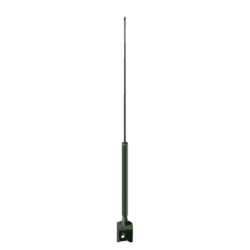 The MVDP30X17AH is a broadband dipole antenna designed to be used with military, private, or commercial applications where reliability is needed most. This antenna works with all radios within the 30 -512 MHz bands.

The antenna has a band pass covering 30-512 MHz within a single input (dual input available) at a power level of 100 Watts. A VSWR of less than 2.5:1 throughout the 30-512 MHz band provides an efficient match to all modern military transceivers.

Being “ground independent”, this antenna can be used on all types of structures (metal or non-metal) with no degradation in performance.

The upper whip may be removed for lower physical signature (lower height) with minimal degradation in electrical performance in the lower frequencies.